MG on the loose in June

Events to consider avoiding in June include:

Society is cracking. Lurching from economic disaster to social decay, our modern day is plagued by sickness. Deepak Lal, world-renowned economist, tackles the hidden roots of our problems in his visionary book Lost Causes.

The Ayn Rand Lecture: The Long-term Consequences of the Financial Crisis

Mr Allison is a strong proponent of Ayn Rand’s Objectivist philosophy, and his lecture will also explore the profound philosophic causes of and cures for the economic problems we face today.

Why does Crony Capitalism (a societal negative sum game) wax while Entrepreneurial Capitalism (a very positive sum game) wanes? “Even the most rational commentators,” a recent book noted, “believe that companies bribe, lie and cheat as a matter of routine.” Of course, some do but is that really a good (or even profitable) business plan? As Schumpeter noted long ago, if crony capitalists are the only face of business, entrepreneurial capitalism is unlikely to survive.

Drinking will, of course, be in moderation…

Another nail in the coffin

Jacqueline Woodhouse is, at least when drunk, a very unpleasant woman. It is entirely possible that she isn’t nice company when she is sober either.

Why do I say this? Because on the evening of January 23rd this year she launched into a foul mouthed and racist rant at her fellow passengers whilst on the tube home. This diatribe was filmed and posted on to YouTube by Galbant Juttla – one of those fellow passengers.

As a result of this she was turned herself into the police and was charged with one count causing racially aggravated “harassment, alarm or distress” by using “threatening, abusive or insulting words or behaviour”. Today, having pled guilty to the charge, she was sentenced to 21 weeks in gaol as well as being banned for a five year period from – whilst drunk – tube or DLR stations, or from using the tube or DLR.

She has also lost her job and is, I would hazard, destined to spend the rest of her ‘working’ years unemployed.

As with Liam Stacey and Luke O’Donoughoe, I in no way condone what she said at all but once again I have to wonder why she was prosecuted.

What she said was abhorrent but prosecuting people for using words that are displeasing to others is to constrain their freedom of speech – a ‘thought crime’ if you will. That such backward views should be challenged when encountered is to to be encouraged but it should be for each individual to do so without feeling the need to resort to using the power of the State to squash an insignificant gnat.

Our forefathers fought against tyranny – let us not undo their hard work by introducing our own.

Aiming in the wrong direction

The train aside, my main – and preferred – method of transport is the bicycle. Yes, I realise that this makes me a member of one of Julia’s least favourite groups but with three exceptions* I stick the to Highway Code and get as annoyed with other road users as they no doubt do with me.

Whilst I am nowhere near Tour de France standard, on a decent, flat piece of road in good conditions I can get up to beyond 20mph under my own steam and on downward stretch of some of the hills between myself and my parents I go through 30mph – and have hit 40mph on one of them before now – without trying (only one of those hills has a 30mph limit).

Basically I cycle (generally) within the rules, have notched up more than 1k miles a year for most of the last 23 years and I cycle at speeds which are sometimes comparable to the motor traffic around me. And yes, I have the tree trunk lookalike legs to prove it.

You can imagine my disbelief then when I read that a city councillor in Melbourne, Australia has called for the speed limit for cyclists of just 20km/h – or 12.5mph in real money.

So, why does said jobs-worth want such a thing?

Cr Ong said he was almost struck by a cyclist moving at speed recently. “The other day when I walked out from town hall I nearly got run over from a cyclist who shot through a red light as I was crossing Little Collins Street right in front of town hall.”

So, a cyclist goes through a red light at what looks like (from Streetview) a fairly active pedestrian junction at ‘speed’** and rather than do complaining about the offence committed, he set his sights on something which had nothing to do offence, viz imposing a speed limit. Typically the prat hasn’t a clue about how to enforce it:

He did not know how the bike speed limit would be enforced. “The thing is not about enforcement, the thing is about education,” he said.

A speed limit is educational? Really? Methinks Councillor Ong has spent too much time sipping the double think juice.

If he wants the problem dealt with then he should ask the local police to enforce Highway Code (or Australian equivalent). I assume it is one of their jobs, much the same as it is back here in Blighty***…

** People, especially stationary ones, are usually poor judges of speed.

*** Before they gave up and left it to speed cameras, obviously.

Falling flat on your Face(Book)

As anyone who has not been spent the last couple of months living off the grid will be aware, social networking giant Facebook (NASDAQ:FB), the brainchild of the hoodie-wearing, university-dropout Mark Zuckerberg, has gone public.

Before it kicked off its Initial Public Offering (IPO) roadshow, FB indicated it would be selling 337.4m shares (12.3% of the company) at somewhere between $28 – $35 a share, valuing the company at $96bn if it achieved the top end of the range.

Subsequently the company raised it’s target price range to $34 – $38 a share, which would value the company at just over $104bn.

Then, on Thursday, once the IPO had closed FB confirmed the final details of its listing: 421,233,615 shares at $38 a pop, raising $16bn and confirming an initial market capitalisation of approx. $104bn.

Facebook makes most of its money through advertising. It is thus concerning that their click through rates are below average. You can add to this their admitted problems with trying to making money on mobile traffic.

Yet, even given what – to me – looked like a company which has been horrendously overvalued, investors and analysts were expecting a first day ‘pop’ with, at the wilder end, estimates of 50% being made.

If I’d been silly enough to buy Facebook shares I’d be looking to cut my losses ASAP.

For comparison, here are the IPO and first day close details of some other internet companies:

Still, I doubt Zuckerberg will be too worried. Even after selling 30.2m shares in order to satisfy the IRS, his net worth weighs in at approx. $19bn. 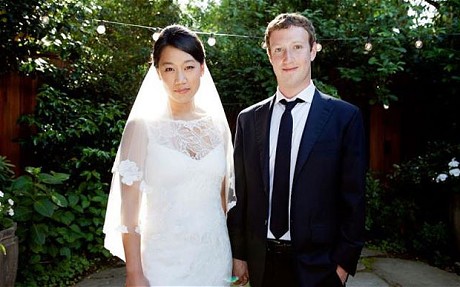 Whilst I am on the opposite side of the marriage debate debate to His Grace, I am vehemently opposed to the actions of those who have complained about him carrying an advert (show below) by the Coalition for Marriage on his blog.

The UK is, supposedly, a democratic, civilised country and in such a country the freedom to express opinions which others might not disagree with should be an inalienable right.

Complaining about someone who has a different opinion to you – and expecting it to be followed up – is an action which Erich Mielke would be proud of.

If the Advertising Standards Authority had any common sense whatsoever it would have gone to the source of the advert, found out what the information used within it is based upon and told the complainants to go and play in the traffic.

Instead they went and harassed a blogger about it. If I were His Grace my reply would be, as others have already suggested, along the lines of Arkell v. Pressdram.

In my ward there are 6 candidates standing: Conservative, Green, Labour, Liberal Democrat and 2 Independents.

Only three of these (Green, Lab, Ind) live in the ward. The sitting councillor (Ind) isn’t one of them.

Leaflets were received from only two candidates (Lab, LD). The LD one didn’t even give their candidate’s name.

The Labour candidate is a perennial one.

So, if I follow my usual rules of not voting for anyone who

then I’m left either voting Labour or spoiling my ballot paper.

Anyone got any good insults?