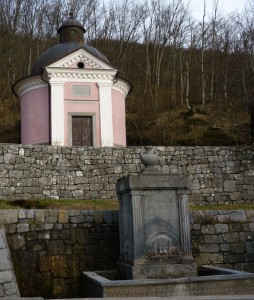 And so the day on which the return leg of the great Contrary Roadtrip was to begin arrived. Since this was the whole purpose of my trip to Croatia – Vicky would be driving home alone otherwise – I was looking forward to it but my excitement was balanced out by the sorrow felt by Vicky and Clare at their parting after four years of being housemates. The friendship will endure but this morning marked the end of a significant chapter in both of their lives.

Given this (and the aforementioned need to cycle three women through one bathroom) it was inevitably a late start so the decision was made to make use of the motorway rather than the coast road in order to ensure that we made our accommodation for the evening in good time. Obviously this came at a cost since our continental cousins are far happier with the idea of road tolls than we Brits are (perhaps it has something to do with the lower taxes levied on petrol?) but at less than a Kuna/mile (about 10p/mile) it was a price we were happy to pay for cruising along at up to 130kph. 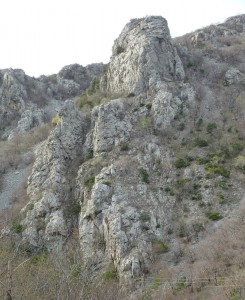 Not going along the coast meant going up and through the mountains – literally. Lots of tunnels, the longest 5.8 klicks – I’d say kilometers but Vicky gets annoyed at me saying klicks

– and all lit much better than the one at Dartford, eased our passage from sea level up to over 2000 ft – at which height there was evidence of recent snowfalls.

To say that for parts of our journey we were the only living souls for kilometers in any direction would be to understate how barren it was in those places. This emptiness was offset by some occasionally spectacular views but we felt that the local plod probably wouldn’t be amused if we stopped to take pictures – Sod’s Law meaning that one would show up just as we had pulled over on to the hard shoulder to do so – so they were taken on the move.

Things became a lot more interesting once we left the motorway and joined the road down to and along the coast for the last hour or so to the bridge over to Krk. This was a road made for driving, especially as we descended from the mountains, and I’m quite jealous that it was Vicky and not I who got to throw the car around on it. The scenery was even better than that on the motorway and we did pull over to take pictures on several occasions as we made our way along it. 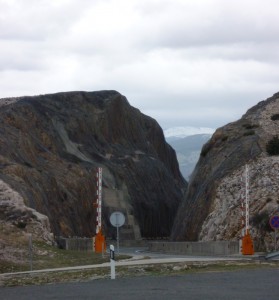 The wind had been picking up throughout our journey and by the time we reached the bridge was probably strong enough to be named something ludicrous by the Met Office. As I type it is howling around outside of our accommodation quite loudly and by the time we got here we’d realised that we should only have one car door or window open at a time in order to mitigate the effects on both the Clio and ourselves.

Krk is very much a place which will only come to life during the tourist season from what we have seen so far – like parts of the coast we passed. Lots of apartments which are obviously holiday lets so are shut up and lifeless. Think Daily Fail tales of villages where many of the properties have been purchased by Londoners as second homes but on a much grander scale. The owner of this apartment is, we suspect, very grateful to be able to rent it out for a night at a time of year when they might otherwise not do so.

The downside is, of course, that very little is open so we are making do with the traditional software engineer food group (crisps and pizza) and the rather less tradition one of red wine whilst trying to cope with the lack of wi-fi for almost the first time since either of us arrived in Croatia (rare is the coffee shop or service stations that doesn’t have it). More detailed planning of tomorrow’s route through Slovenia and in to Italy (as well as the posting of this blog) will have to wait until we find somewhere that is connected to the world…

Tags: Croatia, Krk
Category: Europe, Out and About