The plan we decided upon as we weathered the storm on Saturday night was to find somewhere in stop in Slovenia to break our fast and post the blogs about the previous day (our overnight accommodation being somewhat deficient in the wi-fi department) before continuing to Venizia and staying the night there (instead of our original destination of Isola Albarella). 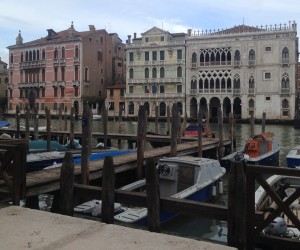 Since the underlying theme of this trip is contrariness things didn’t entirely happen like that. Breakfast in Slovenia became stopping for coffee which became leaching off the wi-fi of a closed cafe because we couldn’t find anywhere in the country that was open along the route of our brief traversal of it. Add in it being wet and it is safe to say that our first impressions of the country were not positive. On the plus side, crossing the border from Croatia (which is not yet in the Schengen Area) was pretty much a matter of waving our UK passports under the noses of the, as usual, humourless officials. Freedom of movement is great, shame about the political crap which is layered on top.

With Vicky insisting on doing all of the driving today, I was reduced to just watching the road go by until we fetched up in Venice. Whilst we didn’t see many other nationalities on the road in either Croatia or Slovenia, once we hit our third country of the day (Italy) this did start to change with vehicles from UK, Austria, Hungary, Bulgaria, Croatia, Slovenia and Ukraine spotted as we drove along.

Venice, even at the beginning of March, is not short of tourists so I shudder to think what it would be like at the height of summer. With its narrow streets it is perhaps how I imagine London was before the Great Fire swept through and Wren’s rebuild ensured that wider streets became the norm. Our stroll around part of the city allowed us to take in some of the sights, including a Vivaldi museum. There are certainly no shortage of tat shops, with the occasional high-end one for the discerning collector of junk but, beyond a postcard, I declined to enter, let alone spend money, in them. Given their number we did wonder how any of them manage to make any money.

Dinner was in a perfectly acceptable restaurant on the other side of the canal our hotel overlooked but, when looking for a bar after dinner, we discovered that at high tide some of the streets becoming a touch wet underfoot. Luckily for me the heels I was wearing were platformed and this saved me from the worst but others weren’t so lucky.

Tags: Italy, Venice
Category: Europe, Out and About