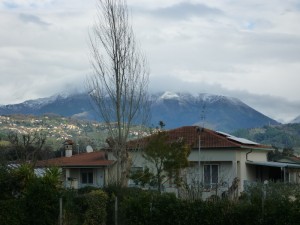 After briefly delaying our departure from Pisa so that we could have a cold shower or, more accurately, walk around the city in the rain in search of postcards, a cash machine and a post box, we left in search of another toll road and the penultimate country of our journey: France.

Much of the road can be summed up in one word: tunnels. Genoa might be worth seeing, it might not, but given that they’ve tunnelled under it and through it, I barely saw any of the city from the road as we went through (strictly obeying the speed limit of course).

Unlike my travelling companion it is my first time on the south coast of France (having previously only visited Paris and Dunkirk or passed through the country in a coach on my way to Austria to go skiing) so we’d decided to stop in Nice for the night. With a hotel room overlooking the Mediterranean and the sun in the sky, we unloaded the car and then set out for a stroll along the Promenade des Anglais (yes, the English are entirely to thank/blame for Nice having an esplanade) after passing through the marina with its risible set of luxury yachts belonging to the more impoverished billionaire oligarch*.

With the sun going down we sat and looked out over the sea for while, including watching traffic out of the airport, before heading back up the seafront and then in to streets behind it for a spot of dinner. With Vicky happy to try the first eatery we come across (unless it’s a chain), I’m the fussy one who will happily wander around in search of a place she likes the look of. What I eventually settled on was a place called Daddies Bistro. Empty when we entered, it filled up a bit later with locals (always a good sign) who were apparently well-known to the staff (an even better sign). The food did not in any way disappoint. Indeed I would go as far to say that it was one of the best meals I’ve had on this trip and I’d recommend the establishment to anyone passing through Nice.

Not, all told, the most exciting day of the trip but a very relaxing one.

* Warning: snark
Tags: France, Nice
Category: Europe, Out and About