Having been thoroughly disparaging about the campaigns themselves, let me now turn my attention to the matter under discussion…

The question before us, come June 23rd, is:

Now go and read it again before continuing. Think carefully about what it says. 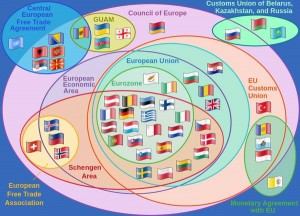 The political organisations of Europe and how they overlap.

This is not a vote to leave the European Economic Area (EEA), aka single market. Nor is it one to leave Customs Union or the Council of Europe. Voting to leave will not remove us from the jurisdiction of the European Court of Human Rights (ECHR). If any of these were on the table then I’ve no doubt that the Electoral Commission would have ensured that the question said so. Our MPs, whether you like it or not, have also made it clear that any move to leave all of the European political organisations would never make it through the House of Commons even if the government was minded to propose such an option – which it won’t be.

That no shortage of people on the ‘Leave’ side believe that a successful vote means we will be able to, in short order, wave goodbye to all of the European political institutions is but a demonstration of how foolish this entire discussion has been. I won’t say become because, frankly, it was dire even before the campaign began. Complete withdrawal – a notion not discouraged by the leading public faces of the ‘Leave’ campaign – might play well with their more fervent supporters but it does not sway undecided voters to the cause. It also plays in to the hands of the ‘Remain’ camp by allowing them to portray those of us who wish to leave the EU as extremists and isolationists, however false those generalisations might be, and point to the various reports (of varying credibility) that detail how bad (the organisations that produced them think) such a course of action would be. 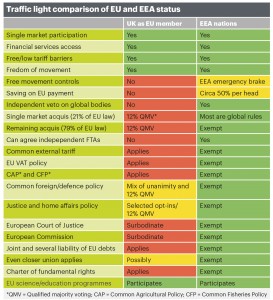 How EU and EEA membership compares

All a vote to ‘Leave’ will do is inform our elected representatives in the House of Commons that the majority (however slim) of the electorate who voted wish to depart the EU. Assuming that the government chooses to listen (which, since it is not a binding vote, they don’t have to) then the sensible course of action would be to negotiate the UK’s departure in such a way to cause the least possible disruption, i.e. move it to the next ring out on the Venn diagram above. Such a move leave the UK free to rejoin the European Free Trade Association (EFTA), along side Norway, Iceland, Liechtenstein, and Switzerland, and the UK’s membership of that organisation would result in it becoming the fourth largest trade block in the world.

Brexit will not lead to an immediate bonfire of EU regulations since these things will take time (read years) to untangle and Article 50 only provides for a two-year negotiation window. Nor will it result in the closing of the borders to immigration or the ejection of EU, EEA and EFTA migrants already here – however much some may fantasize that it will. The idea that only by remaining can the Tories be stopped from destroying the welfare state and returning us to the 1930s is equally as fanciful since there is no hope of any party being able to push such legislation through both houses without significant rebellions and general outrage even if they were brave enough to propose it. 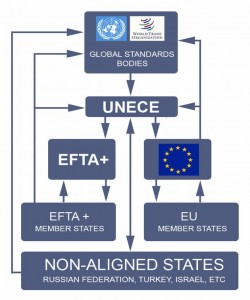 How EU and EFTA members states interact with global organisations

What leaving the EU does mean is that the UK would be able to retake its seats at global bodies such as the World Trade organisation (WTO) where the EU has assumed exclusive competence. It would also once again be free to act in its own interests rather than being overruled and having to follow the party line in organisations where the EU insists on shared competence and block voting. This would allow it to have its say on new regulations before they reach the EU for rubber stamping.

Remaining in the EU is not a vote for the status quo. Whilst politicians on that side of the fence may pretend otherwise, ever closer union is the goal and the UK, having a permanent opt-out of the Euro (along with Denmark), will become increasingly isolated within the decision-making process as the EU will continue to favour the expanding membership of the single currency, a group that will eventually include all recent (and future) members since their ascension treaties stipulate that they must eventually join it. The only way for the UK to have any chance of increasing its ability to influence this would be for it to go all in…

Whether we ‘Leave’ or ‘Remain’ in the EU the UK will still be a member of NATO and one of the five permanent members of the United Nations Security Council, it will control one of the most powerful military forces on the planet as well as being one of the few nuclear powers, and be a member of the Five Eyes signals intelligence initiative (amongst other things).

The UK’s position as a global power will not go away if the UK remains but leaving will allow it to regain some influence in the world at large since doing so will once again allow it to speak freely at all of the world’s top tables as a leading economic power and trading nation should.

With only a few days to go now, the end of the European Union referendum campaign is, after four months, finally (and many would say thankfully) within sight. At the moment of writing the polls are saying that it is too close to call although the bookies still reckon ‘Remain’ will win. Judging by some of the recent output from the ‘Remain’ camp, the tightening polls have seemingly put the wind up them as they awake to the possibility that this whole business is not necessarily going to be the cakewalk they may have thought it would be.

To say that this has been an awful campaign characterised by deliberate disinformation, half-truths, scare tactics, poppycock, threats and outright lies would be to understate exactly how bad the approach by each side has been. Between daft statements about the future of the NHS, inflated estimates of what our annual contribution to the EU budget is, xenophobic dog-whistles regarding immigration, warnings from the great and the good (as well as the not as good)* about an economic downturn to rival that of 2008, and the potential outbreak of another global conflict (to name but a few) there has been little sensible discussion from the vast majority of the political establishment and the commentariat that feed upon them.

With the most prominent figures in both official campaigns all being Conservatives MPs, one could be forgiven for thinking that the other parties are barely involved given how lacklustre their contributions have generally been. Even Nigel Farage has, at least in media terms, been quieter than one might have expected. This apparent lack of input (or attention paid to it anyway) does little to dissuade the more cynical that this whole thing is, in some quarters, less about our relationship with Europe and its political bodies and more an extended hustings over who gets to succeed David Cameron as Prime Minister at some point between now and the next scheduled general election in 2020. (Putting my prognostication cap on for a moment, I would say that it is highly unlikely that any of the prominent individuals involved, i.e. Osborne, Johnson and Gove, will get the job.)

Away from the internal Conservative squabbles, both official campaigns often seem to think that they are fighting a general election with wild spending promises of what we could do with our annual contributions instead (Leave) matched by calls for a credible exit plan (Remain) rather than a referendum one. This nonsensical approach is perhaps because the UK doesn’t (despite this being the third prominent one in five years) have much experience with referenda and so the major participants are taking what they do know and trying to see if all of the skill set is transferable.**

Whatever the eventual result, the last few days are going to be full of plenty more twaddle and there is going to be a lot of nail-biting on both sides before the result is announced come the 24th.

This was originally posted at Libertarian Home last Monday (June 13th before the Labour MP Jo Cox was killed. Her murder, senseless as it was, and the aftermath of it have only reinforced my opinions about the contemptible behaviour of both campaigns.

* As an aside, how many favours has David Cameron had to call in and how many does he now owe as a result?

** Yes, I’m aware that Matthew Elliott ran the ‘No’ campaign in the AV referendum but there is a difference between fighting for the status quo (as he was then) and against it*** when you have to make all the running.

In a rather desperate screed that is apparently an extract from a book that she is flogging, sex work abolitionist Kat Banyard suggests that:

On average, a woman was paid for sex by 76 men each week.

Exactly how many active sex-workers there are in the UK is unknown but estimates range between 50,000 and 100,000 – and all come with various caveats attached. The most widely quoted figure is 80,000, an estimate from 1999 for the European Network for HIV/STD Prevention in Prostitution (EUROPAP) project and was derived by Hilary Kinnell.

In a 2006 census in New Zealand (the only country where sex work has been fully decriminalised), 0.285% of the female population declared themselves to be active prostitutes. According to a 2015 report from the Office for National Statistics the estimated female population of the UK in mid 2014 was 32,803,100. Assuming a similar percentage of sex workers as New Zealand this gives us an approximate figure of 93,500.

Sex work is a broad brush term that covers everything from cam and phone girls, strippers, dancers, some masseuses, dominants as well as the obvious. If we assume that only the latter category are what Kat meant by ‘paid for sex’ then we would need to reduce our estimates to match. With, once again, no way of knowing what the ratio is I’m going to make an assumption that its 50%. I would, frankly, imagine it to be higher but let us be as generous to Kat as we can.

If we apply that 50% to the oft-quoted Kinnell number then that’s 40,000 women each being paid by 76 men a week or somewhere around 3 million commercial sex encounters a week… or almost 10% of the current male population of the country. Replace that 40,000 figure with 25,000 (50% of the lowest estimate) and you have 1.9 million transactions per week (or approximately 6% of males). Does anyone seriously think that this is the case?

Thus Kat Banyard is, to put it politely, talking utter rubbish… but then what else can you expect from someone who thinks that all sex work is violence against women?*

* Quite how this is the works in instances where men pay other men for sex escapes me.
Tags: Kat Banyard, prostitution
Category: Sex  |  6 Comments