Archive for the ‘Media’ Category.

Following on from Sunday’s leak/pre-announcement, yesterday saw the actual announcement of a host of changes to the licence fee.

I’m not, you probably won’t be surprised to hear, a fan of the licence fee, considering it to be nothing more than a tax on watching live television. I’d much rather see the BBC funded though one or more of advertising, subscription or micro-payments.

For myself, I’ve not paid the tax since the analogue signal was switched off in my area in 2012. Having a (now) rather ancient, in technological terms, CRT set and no way to pick up the digit signal via it, I made the decision to stop watching and save myself £145.50 a year.

Like many I am though known to watch programmes via catch-up, an entirely legal (at present) approach which was last week blamed by Auntie for costing it £150m and 1,000 jobs. As if it has a right to that money.

If the government does go ahead and remove this ‘loophole’, I shall either stop watching anything on iPlayer altogether or use a VPN on the odd occasion when I do want to watch something. Either way, the BBC won’t be getting a penny out of me (directly at any rate) unless I buy some of its shows on DVD.

The sneaky, and perhaps downright nasty, move though is lumbering the BBC with the costs of subsiding the licence fee for those 75 and over. Previously this ‘freebie’, introduced by Gordon Brown in 2001, has been borne by the Department for Work and Pensions (DWP) and is estimated to currently cost the taxpayer £631m.

Sneaky because it gets it off the government books and means that the BBC has to swallow the cost yet nasty because it is not the choice of the BBC to provide this subsidy and there is no way for them to withdraw it without finding themselves getting it in the neck from a lot of people and organisations.

If the government (rightly or wrongly) wishes to subsidise something it should pick up the tab itself (with taxpayer money) rather than pass the cost of doing so on to another party which has no power to end it.

The Business Journalist and her tax muddle

My timeline was, on Thursday evening, chuckling about the fact that Margaret Hodge had run into a little difficulty when being asked by Krishnan Guru-Murthy of Channel 4 News about her own tax arrangements.

Whilst it was certainly quite amusing to watch her use the same answer about her affairs that she has publicly derided the likes of Google, Amazon and Starbucks for, my attention was caught by the clip which proceeded it.

I am not an accountant nor an economist – let alone a business reporter – but so far as I can see Siobhan Kennedy made two glaring errors in that piece.

The first is one same one which everybody seems to make these days: confusing sales with profits. Whether this is deliberate or due to ignorance I leave up to you, dear reader, and your personal prejudices.

It was the second one though which had me, to use the modern parlance, facepalming. Indeed I even went back and listened to it again just to make sure I was hearing correctly:

…making sales which could be subject to income tax under UK law.

About the world-renowned author Dan Brown…

As I have mentioned before, I have never tortured my eyeballs by subjecting them to a Dan Brown novel. This was a personal choice and Geoffrey K. Pullum’s The Dan Brown Code simply further entrenched my desire never to do so.

However it is because of Pullum’s piece that I am able to appreciate Michael Deacon’s excellent skewering of Brown in the Telegraph on Friday:

The critics said his writing was clumsy, ungrammatical, repetitive and repetitive. They said it was full of unnecessary tautology. They said his prose was swamped in a sea of mixed metaphors. For some reason they found something funny in sentences such as “His eyes went white, like a shark about to attack.” They even say my books are packed with banal and superfluous description, thought the 5ft 9in man. He particularly hated it when they said his imagery was nonsensical. It made his insect eyes flash like a rocket.

If you haven’t already, do please go and read the whole thing. If, like me, you have chosen to avoid Brown’s oeuvre then read Pullum first.

Here we have two pieces of prose, one (on the left) from Iain Martin, journalist and political commentator writing for the Telegraph and the second (on the right) from Patrick Warner, Conservative Councillor for Sovereign Ward, Eastbourne.

They look identical, no?

Both were published yesterday (April 5th) with Iain’s showing up at approximately 0700 (the earliest comment appears at 0713) and Patrick’s at 1503.

The obvious thought is that Cllr Warner has copied the entire thing without attribution and is passing it off as his own work.

Cllr Warner has been asked (via twitter) why his piece looks uncannily like Iain Martin’s but he has yet to respond.

Cllr Warner has apologised to Iain Martin for not giving him credit.

@iainmartin1 apologies Iain, I often share articles of interest with my readers, usually with the appropriate credit. Unfortunately I missed

@iainmartin1 this on this occasion, I will amend immediately. Kind regards, Patrick

Gone but not forgotten 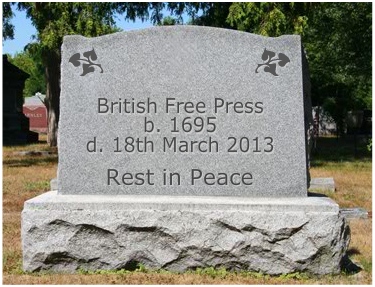 Family flowers only. Donations instead of flowers, if desired, to Hacked Off.

Isn’t it a bit late?

I am no fan of Sally Bercow, considering her to be someone who has done little in life but engage in shameless self-promotion, but her latest ‘gaffe’ has left me more bemused with the law than with her.

Bercow, already on a list of those who wrongly named or linked former senior Tory Lord McAlpine to child abuse claims, sent a message on Monday night to her 60,000 followers on Twitter asking what happened to the teacher, Jeremy Forrest, 30, and reportedly naming the girl.

In the initial stages of dealing with his case, the court made a section 39 order under the Children and Young Persons Act 1933, banning identification of the girl.

My question, for any lawyers who might be reading, is, given that her name was plastered all over the media for the 10 days or so after she eloped with Forrest, why bother with secrecy now? It’s not as if we don’t know who she is…

Calling a spade a spade 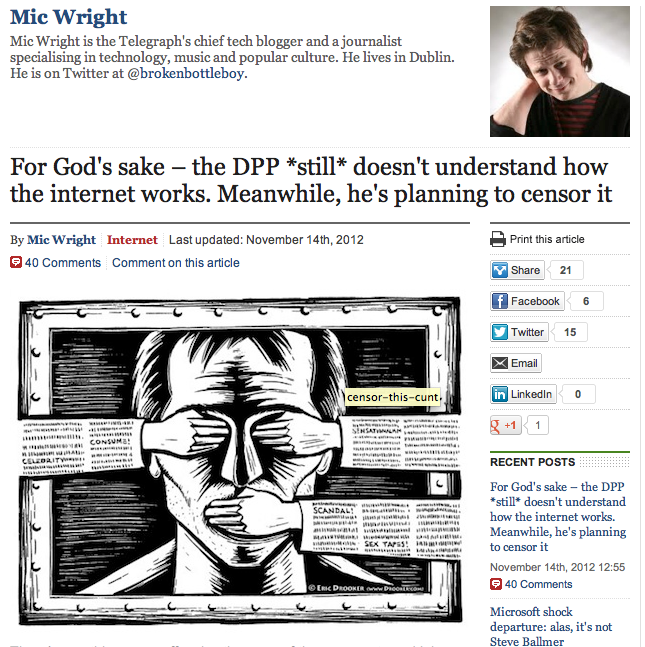 It seems that someone at The Telegraph has the same opinion of Kier Starmer and his authoritarian ways as I do. I wonder if he’ll claim to be grossly offended by this?

The original image is in use on this article and (at least until they take it rename it) can be found here.

It takes three to tango

His “What on Earth were his parents thinking forename” aside, Linney came to the attention of the world over the weekend for posting a picture of himself on Facebook burning a poppy. Assuming that he obtained this poppy by legal means then he is perfectly entitled to dispose of it in any manner he so desires so long as he doesn’t cause harm to other people during the process. People, especially veterans or those involved with veterans’ groups, may find this distasteful and offensive but that does not mean it should be illegal.

Acting on a complaint received, officers from this force arrested Linney. Why they felt the need to do this rather than tell the complainant to stop wasting their time, I haven’t the foggiest. No doubt speculation on the subject will throw up the usual ‘answers’ of diversity, targets, political correctness, the need to be seen to be doing something etc etc but regardless of the reason they have hardly covered themselves in glory in this matter.

If it hadn’t been for this person (or perhaps persons given the reoccurring use of the third person in tweets sent by this account) then Linney’s stupidity may have remained his personal shame. Ok, his and anyone who could see his Facebook profile – which would appear to everyone. A lesson in privacy settings for young Linney, me thinks.

It is ‘Tina’ and her like who are the problems here. Gleefully reporting people whose actions they disapprove of to the apparatus of the State – and cheered on by the useful idiots who agree with them but wouldn’t act as informants themselves – each and every one of these willing collaborators assists the State in its ongoing assault on the freedoms and liberties previously enjoyed by the population.

Somewhere the spirit of Erich Mielke is smiling at his posthumous victory.

A minor bout of swearing erupted on Sunday after seeing reports in the MSM that the Isambard Community School in Swindon had insisted that all parents must obtain a CRB check before watching sporting events at the school:

A spokesman said: “It is with regret that from now on we will be unable to accommodate parents wishing to spectate at our sports fixtures unless they are in possession of an up-to-date Swindon Council CRB check.

“At Isambard we take safeguarding very seriously and because of this we are unable to leave gates open for access to sporting venues at anytime during the school day.

“The current access arrangements are frustrating for both Isambard staff and parents and have recently resulted in reception staff and PE staff being on the receiving end of verbal abuse from parents who have become frustrated trying to get into or out of the school.”

Taken at face value this sounds like a very stupid idea. It is the preceding paragraph to this however which begins to shine some light on matters:

The school introduced the new measure at the start of the term to prevent strangers from accessing other parts of the school from the playing fields.

That the school is hardly keen on random people wandering the halls is fair enough. Can’t blame them for that but CRB checks are hardly the way to do it and parents don’t exactly count as strangers.

What I can’t work out though is whether the press release which the school issued on Monday morning is aimed at correcting what it sees as inaccurate media coverage or if it is a total climb-down on a massive over-reaction:

In light of the recent press coverage regarding CRB checks on parents wishing to watch their children play in sports fixtures we would like to issue the following statement:

“Parents are more than welcome to attend to watch sports fixtures at Isambard Community School. However, there is no access to the sports pitches through the main school building. Parents are requested to use the Tadpole Lane entrance where there is ample parking. There have previously been issues with parents and other visitors arriving at the Isambard Way entrance and being annoyed to be asked to drive to Tadpole Lane. However, we are unable to allow visitors access through the school during the normal school day, which includes the enrichment time between 3:15pm and 6pm. We hope this clarifies the school’s position.”

We apologise for the fact that the Advertiser were given out-dated information regarding this issue prior to the article going to press.

Given the state of the MSM in this country and the knee-jerk “Won’t somebody please think of the children” reaction of the unthinking section of the populace, it could be one, t’other or both!