Sadly we had to depart the warm, sunny interlude that was Nice and head north because we do have a ferry to catch on Friday. I already had commitments for this weekend when the trip was planned else we’d probably have aimed to cross back to Blighty on either Saturday or Sunday in order to ease our passage across France.

With Vicky meeting a friend in Versailles on Thursday, we’d picked Clermont-Ferrand as a suitable place to stop between the two places. Whereas our daily drives had, up until now, been between 3.5 to 5 hours (including breaks), today was going to be about 6 hours before coffee breaks. With the torrential rain that we encountered on the approach to Lyon this only went up since muggins here was not about to do 110km/h on the wrong side of the road in someone else’s right-hand drive car when the windscreen wipers are going full blast.

By the time we rolled in to town night was falling so taking a walk around was clearly out of the question – and we were also tired after spending so long in the car – thus it was simply a question of where to eat once we’d had a rest. The rest turned out to be a bit longer than expected as Vicky had become lost in google map geekery and so was oblivious to the passage of time. I shouldn’t complain since I’ve spent plenty of occasions myself lost in code and suddenly looked up to realise that an afternoon has passed and I’ve neglected to eat or drink. 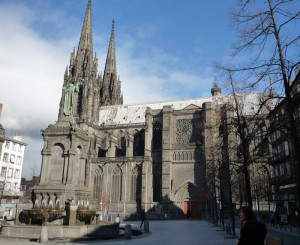 Unlike Nice, we opted for the first place we found in the old town (since that was where all of the restuarants seemed to be) – and that was not in any way a bad choice. If you do find yourself in the city and wish to eat somewhere that is approved of by two obviously bonkers Englishwomen then L’instantané Restaurant is the place to go.

Thursday morning was rather colder than it had been the previous day on the south coast but dry unlike our departures from Venice and Pisa and so we took the opportunity to have the stroll that our late arrival the previous day had ruled out. The cathedral in the centre of the old town is most impressive – both inside and out – and was producing feelings of déjà vu in the driver. This was, in turns out, because she and Clare had briefly stopped in on their way out but this had been forgotten thanks to the multitude of places she has visited over the intervening 16 days.

Photographs taken, it was time to continue our trip northwards…

Tags: Clermont-Ferrand, France
Category: Europe, Out and About  |  Comments Off