The morn when first it thunders in March,
The eel in the pond gives a leap, they say;
As I leaned and looked over the aloed arch
Of the villa-gate this warm March day,
No flash snapped, no dumb thunder rolled
In the valley beneath where, white and wide
And washed by the morning water-gold,
Florence lay out on the mountain-side.
Old Pictures In Florence — Robert Browning

Florence: the birthplace of the Renaissance, once one of the richest places on earth back when it was a trading and financial centre, now considered to be a World Heritage Site… with crumbling streets and, annoyingly for myself and Vicky, a hotel which was now a building site – the very hotel we’d booked for the night of our next stop. Ooops!

Setting off from Venice in the pouring rain our intention was to drive to Florence and spend the afternoon walking around taking in some of its history. Sticking to the fast roads, as we have mostly done since leaving Split, we spent much of the journey on Autostrada del Sole (literally “Motorway of the Sun”). Obviously this piece of trivia is of little interest in and of itself and I wouldn’t have bothered but for the new stretch of the route, the Variante Di Valico.

Built with the aim of reducing to travel time through the Apennine Mountains (and thus fuel consumption and pollution) this ‘bypass’ only opened fully on 23rd December 2015. It is 66.6km in length, of which 49% runs through tunnels, 18% on viaducts with the remaining third not needing any assistance. The longest tunnel on the route is approximately 8.6km long, had a working face of 180m² and required 10.2 million m³ of material to be removed.

That’s not a bad feat of engineering. 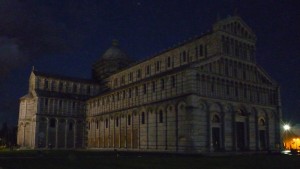 Arriving in Florence we couldn’t find our chosen hotel until one of us (me) got out and went looking for it on foot. What I found was a sign on a wall outside of what was more of an apartment block undergoing renovation than a hotel and certainly no sign of a reception desk. Upon communicating this to my driver it was decided that it would be a good idea to cancel the booking and look elsewhere… an approach which lasted until we were reunited in the car and I threw out the suggestion of trying Pisa instead.

The driver considered this, decided it was acceptable, and so we found ourselves, less than a couple of hours later (including time taken to book a new hotel), standing outside of a campanile with a rather bad list. However as nice as the tower is, we were both of the opinion that two of the other items in the complex, namely the cathedral and the baptistery, are much better.

Tags: Florence, Italy, Pisa
Category: Europe, Out and About  |  2 Comments