No torrential rain and a shorter (albeit by about 90mins) journey meant that this leg of the trip was less arduous than that of the previous day. With no memorable scenery the only highlight of the drive was watching the trip counter pass 3,000 miles during the second stage – followed shortly afterwards by the moment which marked the trip equalling one tenth of the car’s total mileage. The latter fact being of little interest to anyone – except those of us with a more nerdish nature. 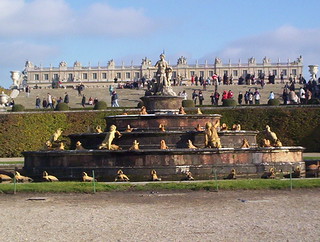 A mid-afternoon arrival in what was once the defacto capital of France was followed by a visit to the reason why: the Palace of Versailles. Le Roi-Soleil moved the court (and by extension the government) there once he’d finished upgrading his father’s hunting lodge and it remained there until the revolution forced his great great grandson to move everything back to Paris just over a century later.

I’d been to the palace before, back in 2003 when my dad celebrated his 50th by taking the family and some of his closest friends to Paris for a long weekend, and at that point the signs of neglect were obvious. Vicky and I didn’t go inside the palace, choosing instead to wander around a portion of the massive 800ha gardens*, but from the outside it was very noticeable that things have changed over the last 13 years. The two pictures of the Bassin de Latone shown in this post are from my first and second visits respectively and you can see the difference.

With Vicky meeting up with an old colleague, I was on my own for dinner so decided to ask the twitter hive mind for recommedations. This did, of course, mean that some people suggested I try the local McDonalds (you know who you are) but also produced a couple of more sensible ideas. One of those was L’Aparthe and I had, once again, a very pleasant meal and a carafe of red wine.

All good things come to an end however and the 0600ish wake up the next morning to ensure that we made the ferry out of Le Harve at 1100 was a sign that that point had been reached.

* To lapse in to journalism measurements for a moment this is approximately the equivalent of 800 Trafalgar Squares
Tags: France, Versailles
Category: Europe, Out and About  |  Comments Off